Get it this way:
*Get $5 OFF orders over $75 when you pick up in store!
at
No availability within 15 miles. .
Change Store
Everyday Free Shipping $35+
DELIVER TODAY
(FREE on orders >$74.99!)
Learn more
Deliver to
Verify Address Change
Please provide your address to verify you are within our delivery area.
Select Condition For Availability
Buy Together
Mario Super Sluggers stars the ever-lovable Mario and his crew of friends. It builds on the social-gaming fun and movements people learned in Wii Sports and turns them into a full-fledged baseball game that can be played by every member of the household. Players make a throwing motion with the Wii Remote controller to pitch the baseball and make a swinging motion to swing at the pitch. The game boasts more than 30 playable Nintendo characters and all the madness of a Mario sports game. Just like Mario Kart Wii, it bridges the gap between experienced players and those new to the Wii console, with fun challenges and beautiful graphics.

Let the Wii Remote controller be your bat as you join Mario, Luigi, Peach and the rest of the gang in a rocking, socking baseball extravaganza.

Newcomers to gaming or sports titles will be up and running on Mario Super Sluggers in no time. Simply swing the Wii Remote to smack a home run, or use a pitching motion to toss the ball over the plate. Two, three or four players can pick up Wii Remote controllers and challenge one another to a full baseball game or compete in a host of baseball-themed mini-games. There's even a home run hitting contest. Mario Super Sluggers boasts more than 40 playable characters, all Nintendo favorites. The single-player adventure mode allows the player to explore Baseball Kingdom, tackle dozens of fun baseball challenges and unlock new characters that can be used in any mode. You can also play with your Mii characters in Exhibition, Toy Field and Minigame modes.

Special powers/items/moves/features: This isn't your typical baseball game. From special moves to obstacle-filled stadiums, there's always something new around the corner.

Special Moves: All of the captains have unique Star Skills that allow them to perform special moves while pitching or batting. Mario can turn his fastball into a fireball, Daisy? can create a flower garden in the outfield and Luigi can turn infield hits into a raging tornado. Non-captains can also use Star Skills to put a little extra mustard on hits or pitches.

Chemistry: Just as in real sports, certain characters in Mario Super Sluggers have a special connection on the field. Known as chemistry, this connection allows players to make spectacular leaping catches, gun down speedy base runners and use items to interfere with fielders.

Stadiums: There are nine unique stadiums in the game, everything from an ice-filled castle to an urban cityscape. Many stadiums can be accessed at both day and night, allowing you to play a doubleheader under the lights.

Can I his be played on the new Wii U?

Asked by: Linda48
Yes you just have to go to wii menu
Answered by: Oof7

Will this work on Wii U?

Asked by: Amber819
Yes but you will need to enter Wii mode
Answered by: Anonymous

Do you need wii motion plus attachment to play?

Asked by: BradyBoyer
No, Wii motion plus it's not needed.
Answered by: Rhoad

What wii device can this play on?

Does this come with instructions?

Asked by: DoIreally need a nickname
Mario Super Sluggers is rated 4.3 out of 5 by 152.
Rated 5 out of 5 by Anonymous from Mario Super Sluggers My grandchildren who are now 19 & 20, lost their original game & loved it! They were so glad to be able to get it again!
Rated 5 out of 5 by Anonymous from Great game, worth the price and then some!!! A really great game that’s easy to master and chock full of content! However, it’s only truly a blast of you’re planning to play with others.
Rated 5 out of 5 by JustinEJ from Perfect Shelter at Home Game!! Awesome game for kids. Will give them hours / days / weeks / months of fun. My kids love starting it all over from the beginning. Perfect for Shelter at Home!
Rated 3 out of 5 by mcfadden45 from N/A Works ok, but hard to understand to play game for a 10 year old
Rated 5 out of 5 by Joshua_17 from Mario Super Sluggers review Great game, it's entertaining, especially to younger kids like my nieces and nephews, they love this game
Rated 1 out of 5 by Brewerfan from Didn't work Bought this game used online from Gamestop. Game did not work when we got it. Had to take it back to a store to get a refund.
Rated 2 out of 5 by Irasol from Not what i was looking for. We thought it would be like the baseball on the Wii Sports, but it was not. So it wasn’t very fun for us. And hard to understand.
Rated 5 out of 5 by Chuck2112 from Fun times Fun fun fun - good old baseball Mario style - solid though 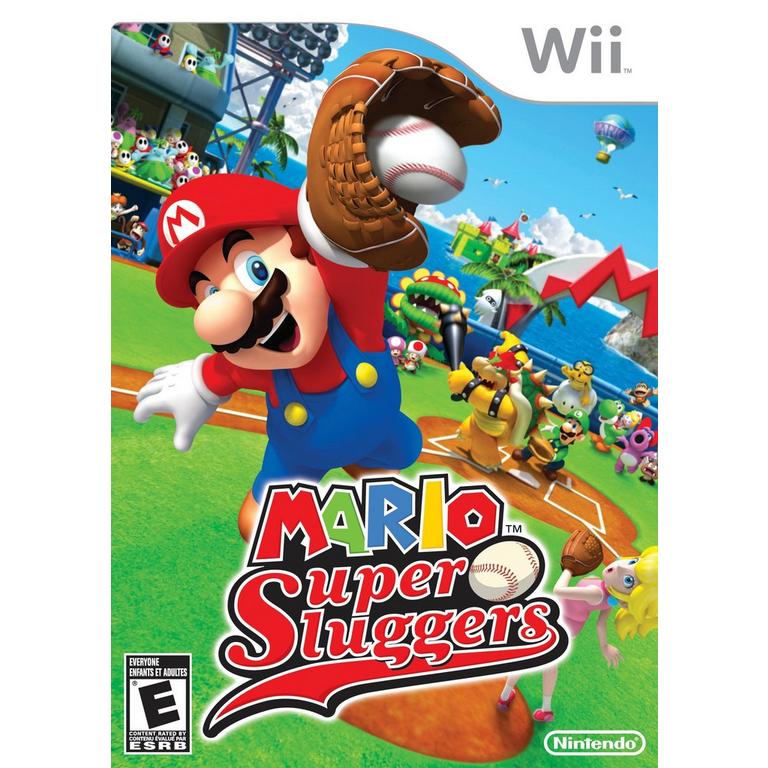