Fantasy Violence
Mild Blood
Mild Suggestive Themes
Use of Alcohol
Bravely Default is rated 4.6 out of 5 by 123.
Black Friday Deals

Get it this way:
Free pick up at store with delivery@door
at
No availability within 15 miles. .
Change Store
Everyday Free Shipping $35+
DELIVER TODAY
(FREE on orders >$59.99!)
Learn more
Deliver to
Verify Address Change
Please provide your address to verify you are within our delivery area.
Select Condition For Availability
Buy Together
Square Enix's highly-acclaimed fantasy RPG brings deep, strategic combat to the Nintendo 3DS™ system in an ambitious game that bolsters its turn-based combat with a compelling new risk/reward system RPG fans will obsess over. Explore Luxendarc as Tiz and other memorable characters on a visually stunning quest to restore balance to the world.

Hand-drawn 3D backgrounds and a rousing score bring Luxendarc to life. Enter a brave new world of turn-based combat! Time your turns tactically and turn the tides in your favor with the new Brave and Default system. Flex your strategic muscle by combining more than twenty jobs with hundreds of different abilities. Summon friend's characters to fight by your side, or borrow their abilities*. Recruit citizens with the StreetPass feature to rebuild Tiz's destroyed village. Be part of the community in this fresh take on the single player RPG!

Only the BRAVE will triumph

Dark times have befallen the land of Luxendarc, and its fate is in the hands of Tiz Arrior and his three comrades. Mold them into heroes as you take a fantastic journey in Square Enix's highly acclaimed RPG for the Nintendo 3DS system.

Agn&egrave;s watches over the Wind Crystal, one of the four crystals worshiped by the faithful of Crystal Orthodoxy. When a dark power overruns her temple and the world, she sets off on a quest to awaken the crystals.

The sole survivor of Norende, Tiz Arrior is haunted by his failure to save his brother. He won't rest until he has restored his village.

Initially dispatched by her father&mdash;the Grand Marshal of the Eternian Forces&mdash;to capture Agn&egrave;s, Edea eventually joins Tiz's party in their quest to seek the truth and restore balance to the world.

Confident and charming, the rakish Ringabel remembers nothing of his past. The future is another story&mdash;this maidens' man possesses a mysterious journal that tells him his destinations and the people he will meet.

This Cryst-Fairy accompanies Agn&egrave;s on her journey and provides valuable information about Luxendarc and the ways of the world.

DARE to risk everything in battle

Calculated risk and reward are central to the battles in Bravely Default. As you wander the landscape of Luxendarc, enemies will take the fight to you when you least expect it&mdash; so you need to be ready with a well-balanced team and sound strategies.

Breaking Down the Battle

Success in combat demands that you wisely manage your Brave Points (BP). When you enter a battle, you can elect to Default&mdash;which partially shields you from attacks and builds up BP&mdash;or to Brave&mdash;which spends BP to unleash multiple attacks at once. If you unleash your Brave attacks at the right time, you can defeat tough enemies quickly, preserve the health of your party members and gain bonus points towards jobs and experience.

In addition to Brave Points, your characters can use Sleep Points (SP) to freeze time for your enemies during battle with the Bravely Second command. It's a powerful tool, but you should use it sparingly&mdash;you need to put your Nintendo 3DS or 2DS system in Sleep Mode to slowly build up your SP.

Each weapon has special moves that you can make your own with customized names. You can also create a battle cry for when you unleash the move in combat. Assign your move to your profile, and then exchange it with other Bravely Default players via the StreetPass feature.

Does the game include case and manual?

Asked by: alberto2518
Bravely Default is rated 4.6 out of 5 by 123.
Rated 5 out of 5 by Anonymous from Woooooo! Absolutely beautiful game. So much bang for my buck
Rated 5 out of 5 by Icy RU from A Brave Game It is a fantastic take on the turn based RPG genre. Along with it's customizable gameplay with a wide range of classes, it brings a great story to be remembered, with characters full of life.
Rated 5 out of 5 by Merick Martinez from Great game! I really enjoyed this game. Although there is one section that is kinda dragging the game as a whole is very fun and even on normal it is not a total breeze to beat. The visuals are very good for a 3ds game and they're so many quality of life improvements like setting how many random encounters you would like as well allowing you to change the difficulty whenever you want. Another thing is the battle experience which is very fun and allows for lots of strategy. One additional little thing that may put people off is menu control where you have to use the d-pad... Do not fret though it isn't honestly bad I sometimes forget to go back to the circle-pad when outside the game, so don't worry. Overall I feel that if you like JRPGs you will really enjoy this.
Rated 5 out of 5 by Alex Mirelez from Love it! Love this game! The battle system is unique, and I love the customization of jobs and abilities. It has an amazing storyline, and I love the personal party chat amongst the characters.
Rated 5 out of 5 by Taylor King from The best game on the system! It took me forever to find this title and the sequel Bravely Second. This game is not short of a masterpiece, with a vibrant story, voice acting, gameplay mechanics and art direction. For new buyers, this is an excellent step into the JRPG genre, and for established fans of the genre, you will feel right at home with this epic adventure.
Rated 5 out of 5 by KlownWasHere from Excellent! Excellent RPG for the 3DS. It feels like a modern yet classic Final Fantasy game with changeable classes/roles and a fantastic story.
Rated 5 out of 5 by slambert from A Classic RPG in a New Role A phenomenal game from start to finish, Bravely Default takes the best of old-school RPG classics like Final Fantasy and blends them with new elements. Characters are memorable and the system for combat is top-notch. Well done all the way around from sound to graphics and game play. Highly recommended.
Rated 5 out of 5 by Bezsmear from I wish more of the console RPGs were like this Love JRPG style games. Haven't gotten to finish it but it did provide an old RPG fan some enjoyment. 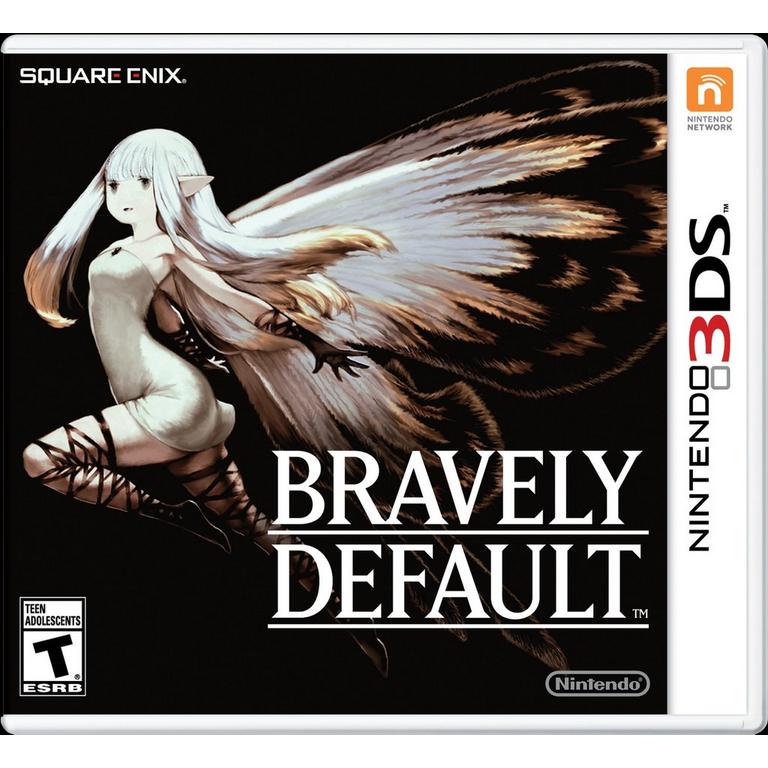