Get it this way:
Free pick up at store with delivery@door
at
No availability within 15 miles. .
Change Store
Free Standard Shipping $35+
DELIVER TODAY
(FREE on orders > $35!)
Learn more
Deliver to
Verify Address Change
Please provide your address to verify you are within our delivery area.
Select Condition For Availability
Buy Together
12th Annual Interactive Achievement Awards Winner: Fighting Game of the YearDuke it out with your favorite Nintendo characters in Super Smash Bros. for the Wii. Solid Snake from the Metal Gear Series makes a special appearance in this title for the Wii game system. The new Smash Bros. will include a number of new playable characters such as Meta Knight from the Kirby games, Pit from Kid Icarus, Zero Suit Samus (i.e. Samus without her armour) from Metroid: Zero Mission, Wario and, most unexpectedly, Solid Snake from Metal Gear and Sonic the Hedgehog, Sega's loveable blue blur! The Nintendogs also make an appearance, although only as an item for obscuring the screen, and each character now seems to have some gigantic new special attacks that take up the whole screen. Not only will the game have an online mode but it is the only major Nintendo title to use the “shell” controller by default rather than the Wii remote.
Game storyline: In multiplayer games, characters from all Nintendo universes meet up in Nintendo locales to duke it out. In the solo mode called The Subspace Emissary, the world of Smash Bros. is invaded by an entity called the Ancient Minister and his army of creatures, called The Primid. Normally, characters come alive in the world of Smash Bros. to do battle, then turn back into trophies when defeated. However, the Ancient Minister starts turning characters into trophies to harness their power, then detonates bombs that suck pieces of the world back into his realm of Subspace. Eventually, all the characters must work together to defeat the invading creatures from Subspace - this is accomplished by playing through side-scrolling levels.

How to progress through the game: For multiplayer games, players pick characters, set rules and locations for where they want to play and then duke it out. In Solo Mode, characters play through a long, side-scrolling adventure, beating up enemies along the way as they watch short cinematics starring their favorite characters.

Characters: Mario, Samus, Bowser, Donkey Kong®, Solid Snake, Meta Knight, Kirby™, Pikachu®, Zero Suit Samus, Link, Zelda™, Pit and Wario™, to name just a few. Anyone and anything from a Nintendo universe could appear in this game in one form or another.

Special powers/weapons/moves/features: Anything from a Nintendo game could conceivably be in this game, whether it's a musical score, an obscure item or a character that shows up to help the fighters. Super Smash Bros.Brawl is eminently customizable, so players can choose the frequency of items appearing, adjust musical scores and basically play the game however they'd like. Items range from baseball bats to proximity mines to Poké Balls to Assist Trophies, which spawn characters like Hammer Bros. and Sim City's Dr. Wright to attack others. 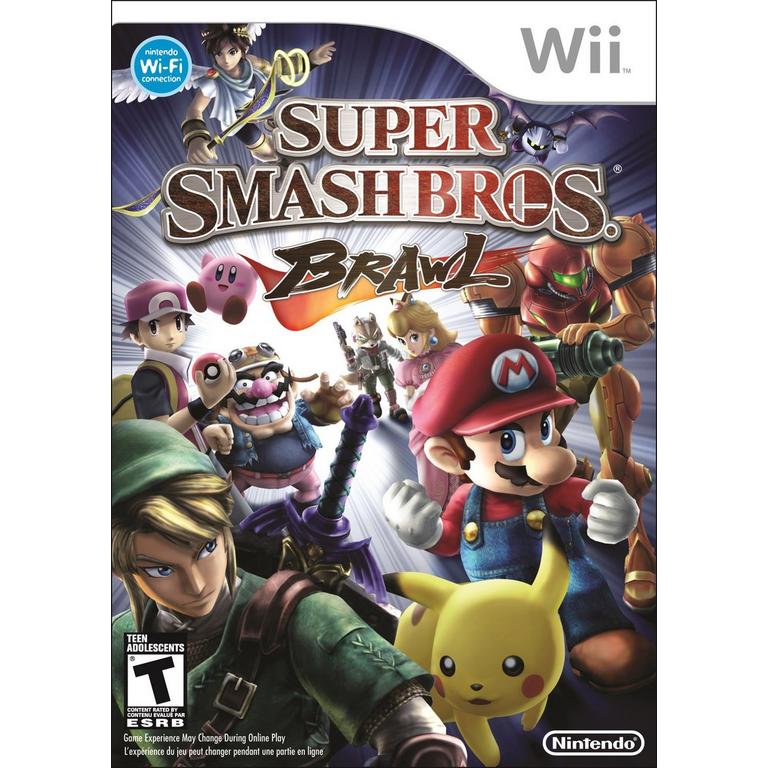