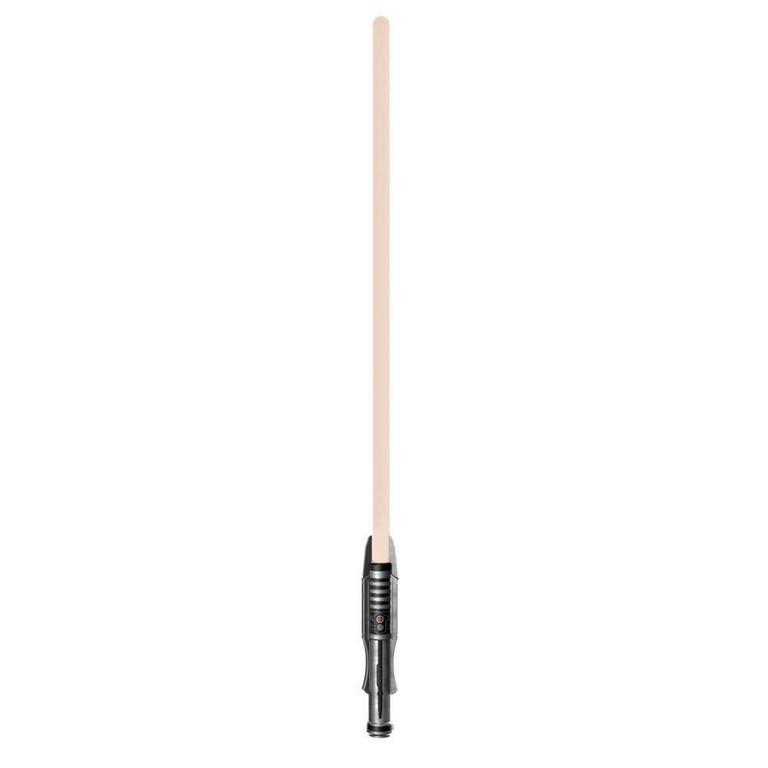 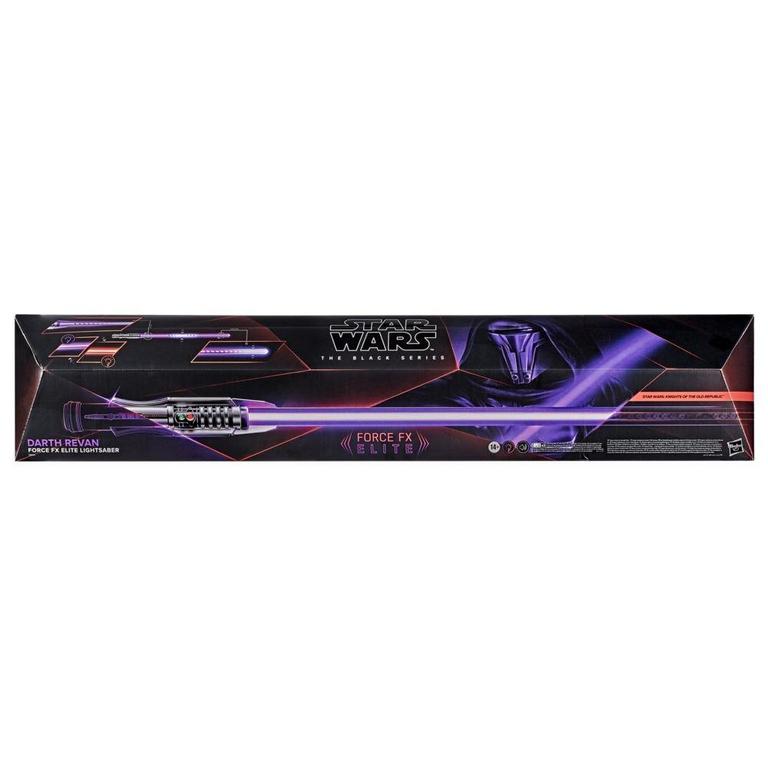 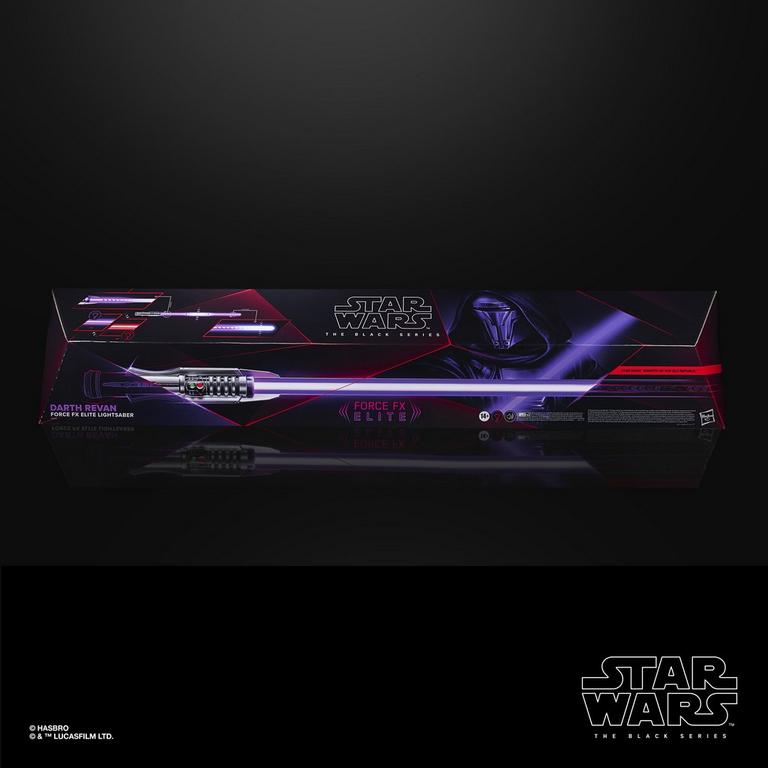 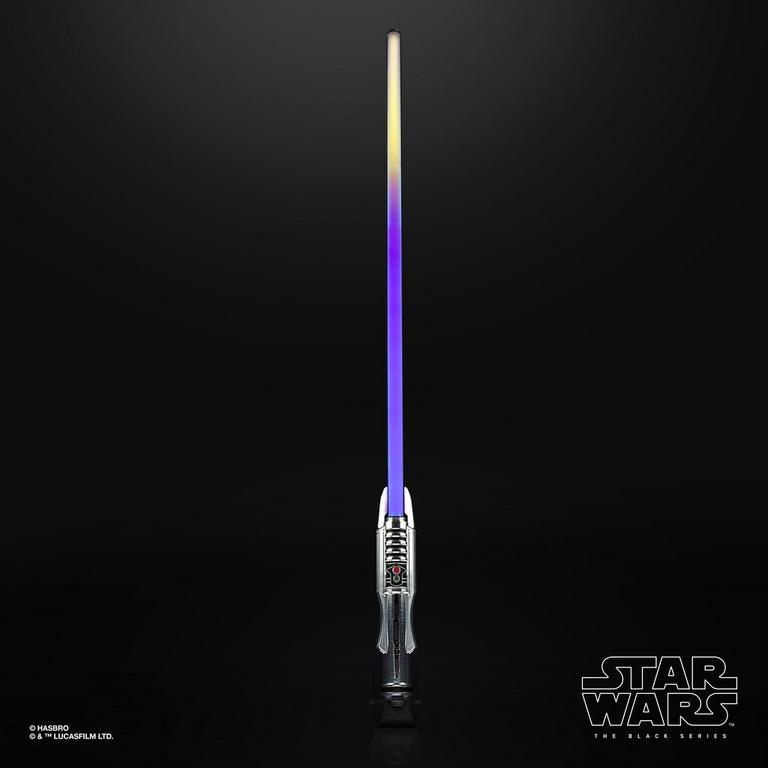 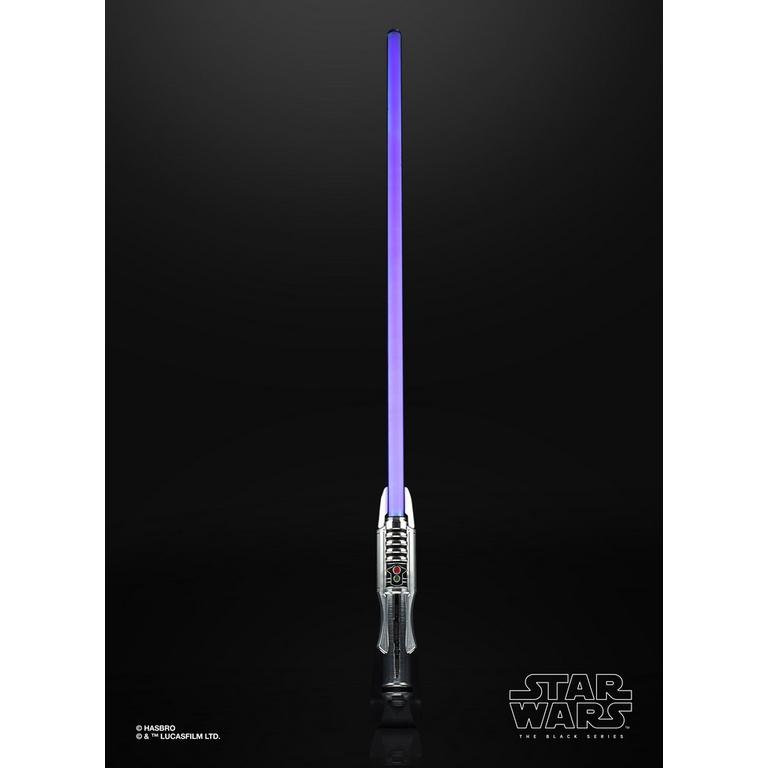 In the Star Wars lore, Darth Revan’s journey from Sith to Jedi is evidenced by the color of his lightsaber blade! As a Sith Lord Revan wields the familiar red-bladed lightsaber, but as a redeemed Jedi Knight he brandishes a lightsaber with a purple blade! Fans can imagine the biggest battles and missions in the Star Wars lore with lightsabers from The Black Series (Each sold separately. Subject to availability.)! With exquisite features and decoration, this series embodies the quality and realism that Star Wars devotees love. With the Force FX Elite lightsaber, featuring advanced LED technology, fans can imagine imagine Star Wars action and adventure.

Press the top button on the real metal hilt to activate the blade ignition sequence, lighting up the advanced LEDs for a smooth ignition effect. Press the bottom on the hilt for Blaster Deflection FX, hold the bottom button for Wall-Cutting FX, and hold both buttons at the same time to change blade colors from purple to red and back again, inspired by the special effects of the Darth Revan lightsaber as seen in Star Wars: Knights of the Old Republic video game!

Recreate and reimagine scenes from the latest Star Wars Galaxy with a variety of light and sound effects powered by advanced LEDs and amplified sound technology. Multiple buttons on the real metal hilt activate the different effects, including a blaster deflection effect, wall-cutting effect, color-changing blade, and more. With advanced LEDs, the progressive ignition in the Star Wars The Black Series Force FX Elite Lightsaber is the smoothest of any Force FX Lightsaber, to more authentically recreate the lightsaber effects from the movies. The Darth Revan Force FX Elite Lightsaber even comes with a removable kyber crystal that not only glows inside the hilt when the power button is press but will continue to glow for up to 2 minutes after removed, before fading out. If the crystal is removed while glowing purple, it will slowly change to red before it fades out! 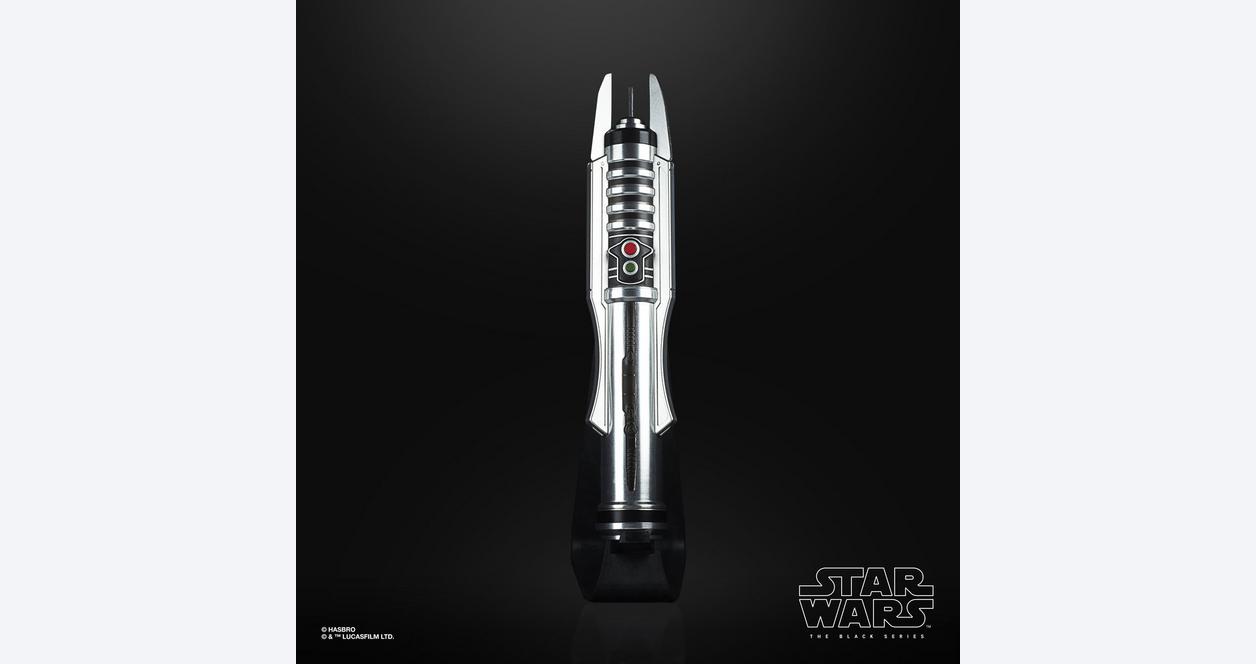 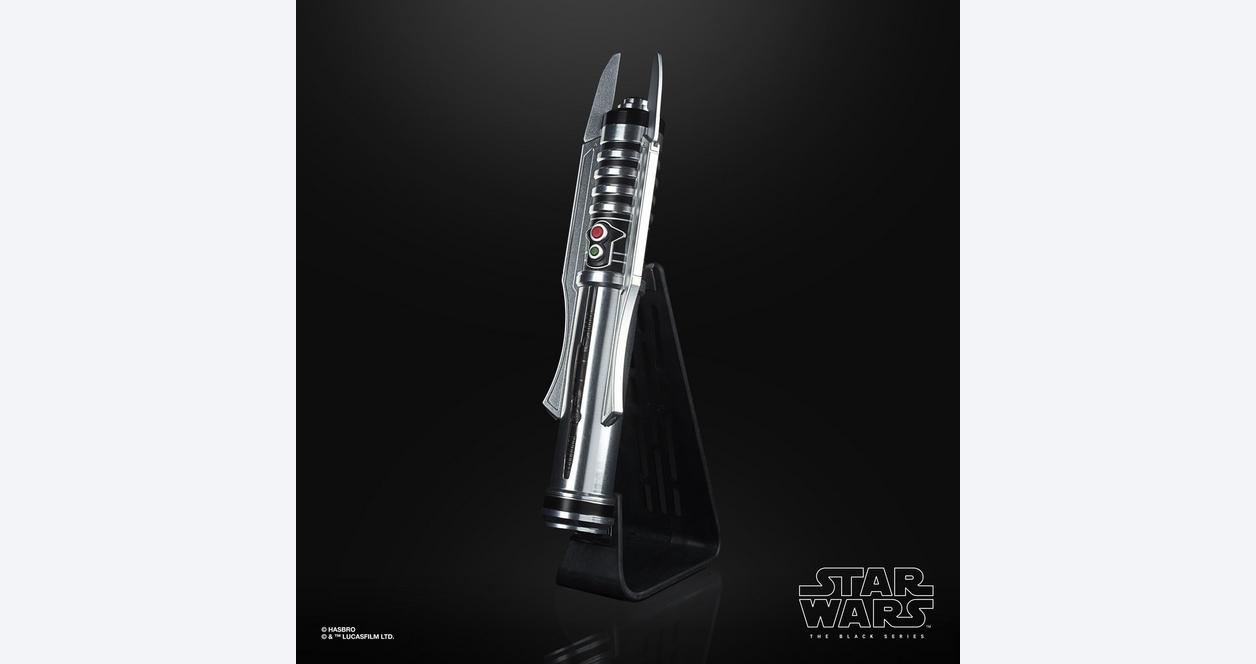 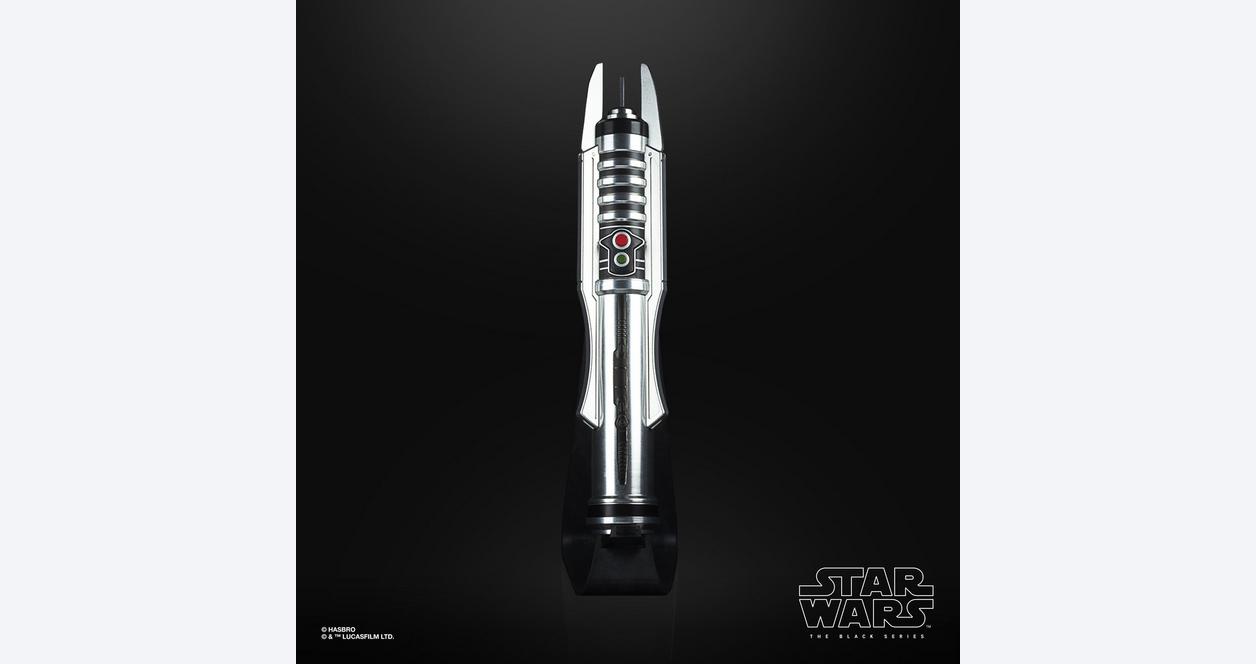 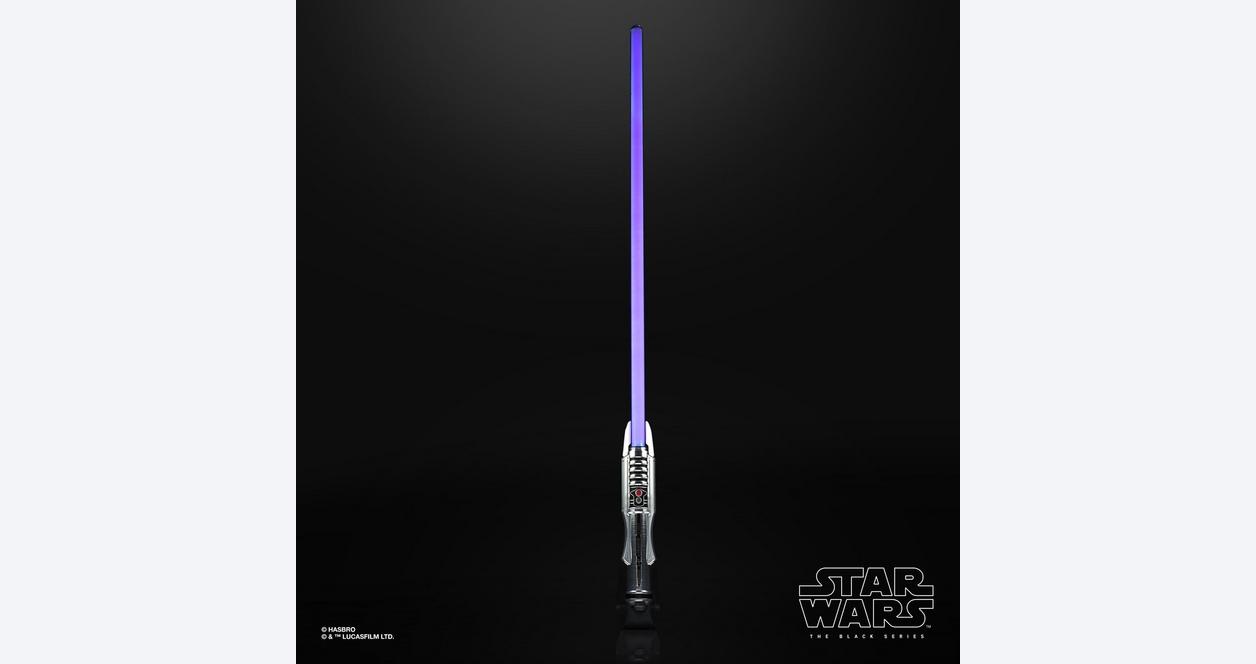 Does the purple blade actually have a yellow tip?

Asked by: Luxeon
I&rsquo;m almost certain that the tip will light up/flash yellow when it clashes with another object.
Answered by: Beastly Rex

Is the blade removable and does it come with a purple kyber crystal and a red kyber crystal or just one with the option to buy a second&nbsp;

Asked by: The Jedi are evil
1) Much like Kylo Ren&rsquo;s Deluxe Force FX Lightsaber, the blade should most likely be removed.&nbsp; 2) The Kyber Crystals can be interchanged to switch the color from Purple to Red and vice versa.
Answered by: Beastly Rex

Do you know if the hilt will have a clip to wear it ? 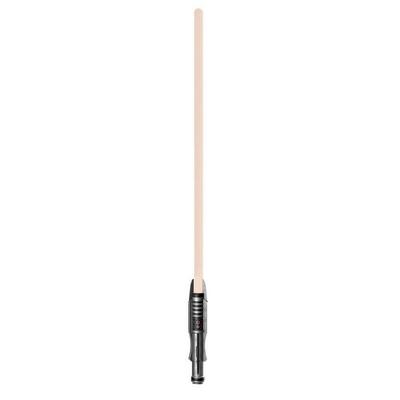